Noticed a dent on your brand new car and want it removed? Or are you selling a vehicle and want it to maintain a high resale value? Whatever your story, “DENTS R US” will help you achieve your goal with the cheapest solution available! Paintless car dent repair (also called PDR) is a technique for removing car dents without painting them. It was first developed on the Volkswagen production lines in Germany. Paintless dent removal is more of an art than a trade and is very hard to muster, with many thousands of hours of practice involved to perfect the technique. Excellent hand eye coordination is required to locate the tip of the tool, with special lights and reflector boards used. PDR is performed by reading the dent’s “highs” and “lows” and removing the car dent by massaging it from behind with a special rod. A special glue pulley is used for any area inaccessible with a rod. PDR can be performed on cars that have dents as large as a football, ones cause by supermarket trolleys and dents made by car doors. It is also a great technique for removing hail dents. The paint that is used on new cars is almost impossible  to match because of the process on the production line. As a result, half the car may need to be repainted to make it look presentable again. All of this because of one dent. It’s impractical! Paintless car dent removal is the only alternative to repainting. It is much cheaper than the traditional panel beating work performed to remove dents. This results in you receiving a much higher value for your money. PDR is simply the only way to go! 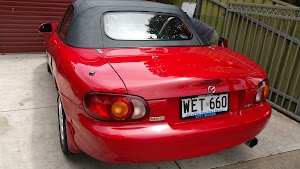 Morrells Vans
01:10 14 Sep 18
We use MR Dent { Paul } on all of our cars for Paint less Dent removal his work is the best in the car industry !! large or small dents simply disapeare they tap the dent back into shape no paint, on bog, no waiting times. It is amazing to watch. We all ways support SA owned businesses and would highly recommend Mr Dent to anybody.

matt williams
13:45 30 Aug 18
Was very good and quick, knew what he was doing, reasonable price, and wants customer satisfaction. Removed a large dent and a smaller one with skill and ease. Would recommend to friends.

Iris Lim
06:16 24 Aug 18
I will give Paul 6 stars! He is super helpful and professional! My husband and I went to Paul with dents that were too big to fix. Though there was no chance to do our business, he did not turn us away but instead gave us advice patiently on how to go about looking for wreckers for the spare parts. We found the spare parts very quickly and had our car fixed in a jiffy. We are so impressed by Paul's extra mile service and will definitely recommend him to anyone who needs to fix dent. A BIG THANK YOU, Paul!

chris ftinogiannis
06:57 15 Jan 18
Fantastic job and service. Paul removed quite a sharp dent from the tail gate of my Ford Ranger. The dent was not only deep but also sharp i thought it would definitely need some panel beating, all within 30min. Paul was willing to give it a go with the guarantee that if he couldn't get it out there would be no charge. Great guy, goes out of his way to help, highly recommend his work.
See All Reviews

Karandeep Singh Chana
2020-05-07T08:21:15+0000
Daniel did an awesome job of removing a ding from the offside rear quarter panel on my Mazda 3 such a top notch repair and excellent price ❤️ Would definitely recommend 👍🏽read more

Sam Tiller
2020-01-14T10:47:28+0000
Easy to find! Job done quicker than expected Removed dent which was caused by hitting a kangaroo in new car & then touched up a couple of spots where paint had been chipped @ NO EXTRA CHARGE Thank you Paul.. very happy with your service Definitely recommend Mr Dent, Woodvilleread more

Lisa Samarzia
2020-01-13T09:40:12+0000
Highly recommend!! 10/10. Expert, we’ll priced and extremely accommodating. We regret not going to Paul first before taking our car elsewhere to a business who gave us the run-a-round, charged a fortune and the finish product was appalling. When Paul was finished with the car it looked brand new. So pleased.read more

Himi Ibrahim
2019-08-09T04:55:16+0000
Recently moved to Adelaide and missus bought a car down here. Purely by luck I was just trying to find a quick fix for a quite large old existing dent on her Pulsar hatch. Panel and paint shops are mostly quoting in the region of $500+ which means, respraying the entire tailgate and all which is not worth investing on such a cheap car. Sent Mr Dent a message and set an appointment. Incredibly the result was amazing and only due to a small chip of paint while in the process of dent repair, they refused to charge me anything! I insisted to at least pay the minimum amount which was way below what was quoted. Daniel is a lovely chap and the Paul is an amazing owner who knows his way to start a conversation with potential customers. Not that I want to fix dents again but if minor accidents were to happen, I would head straight to them to get the dents fixed. Truly genuine and honest people right there and happy to support their business with their such receptive attitude. Will be recommending these guys to my mates and colleagues here in Adelaide. There is so much hope in the automotive repair industry down south!read more

Trevor Hill
2019-07-26T04:53:16+0000
Paul fixed a couple of dents and a shallow scratch in the bonnet of my Mazda BT50 to perfection. Amazing work, friendly service and great price. Lovely bloke. Thoroughly recommend Mr Dent to fix those annoying dents we all get.read more

Stacey Bensch
2019-06-14T03:45:48+0000
100% would recommend Paul and Mr Dent Adelaide to everyone! No matter how big or small the job they will get it done with the upmost care and respect that your car deserves. So so happy with the result in my pride and joy!read more

Deano Webster
2019-06-08T09:16:47+0000
Paul fixed my dent in my VW transporter with great service and price and I would highly recommend his services to anybody... Great guy and will use again😁read more

Clayton Lorimer
2019-04-27T05:02:39+0000
awesome service, did insanly well with getting out a difficult dent in the roof of my car super impressed cheers again guy highly recomend!read more

Melissa Peake
2019-02-22T06:55:52+0000
Daniel and Paul did a fantastic job removing two dents from my car- one on the crease around my guard, the other near my front right panel. The dent near my guard was quite significant but Daniel and Paul completly removed the dent. There is no evidence of either dents ever being on my car. Overall, very happy with their service and was impressed how they could squeeze both myself and husband in on the same day despite the late notice. HIGHLY RECOMMENDED!read more

Brock Peake
2019-02-22T06:10:05+0000
Daniel and Paul did an amazing job on my car. i honeslty thought i would have to take my car to the crash shop to be repaired, but they were able to fix it both dents and a crease as if they were never there!! i couldnt be happier with their work an cannot speak highly enough of thtem both. Fantastic work and great peopleread more

Steven Molenaar
2019-01-21T00:14:10+0000
Daniel was a pleasure to deal with from start to finish. Their work is second to none and I was very impressed with their attention to detail and professionalism. Both Guys are very friendly and approachable. Highly recommend. If I have any other dent repairs I’ll be sure to go back. 👌🏽read more